Jockey David Probert stole the show at Salisbury on Thursday 2nd May, riding a double on the evening card, sponsored by William Hill.

The well supported newcomer Firepower justified favouritism in the opener on the card for trainer Clive Cox and jockey Adam Kirby in the 2-year-old EBF Novice Stakes over 5 furlongs.

There was a surprise 66-1 winner in the 6-furlong Handicap. Air of York, ridden by Stevie Donohoe, landed the race after 103 days off to give trainer John Flint his first win of the season at Salisbury.

Trainer Ed Walker saddled Hotsy Totsy in the 18 runner 7-furlong Fillies’ Novice Stakes, for 3-year- olds, who stepped up stylishly and travelled confidently under Liam Keniry to beat short price favourite Alhakmah by five lengths. She looks a nice prospect and certainly one to keep an eye on. 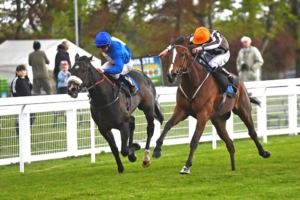 There was disappointment on the card when the Henry Candy trained Past Master was withdrawn at the start in the feature race of the day, The William Hill Handicap Stakes. The race was won in determined fashion by Eve Johnson-Houghton’s Hyanna under a strong ride in a gritty finish from Charles Bishop.

Henry Candy gained compensation in the William Hill Extra Places Every Day Handicap when Seascape relished the step up in trip on her handicap debut and pounced late to give jockey David Probert his first leg of the double on the card. A mention should also go to the Colin Tizzard trained Catch The Cuban who finished a length behind on debut for a stable who rarely race on the flat.

David Probert completed his double onboard another handicap debutant Green Etoile for the dual-purpose trainer Alan King, when his mount chased down the long-time leader Bonneville to pip him on the line by a head, in The William Hill Betting TV Handicap Stakes.

The card was rounded off with a win for another dual-purpose trainer, Seamus Mullins, who trains locally to Salisbury. Oborne Lady won cosily, on turf debut, in the 1mile 6furlong Handicap for enthusiastic owners Simon & Christine Prout and the in-form Rob Hornby.

Salisbury race next on Thursday 16th May, gates open at 12pm.